J and I had a wonderful thanksgiving dinner with at his sister’s house.  His parents were also there along with 4 out of the 7 nieces and nephews.  It was a gorgeous day so the kids and adults were able to spend lots of time outside playing horse shoes after eating dinner.  While we were over there, J’s sister and I started talking about her dSLR camera and some of the options available now.  I mentioned that it was a purchase I had been thinking about for a while.

We made it home by 4 pm and were able to relax and eat a light dinner.  J and I discussed the camera options and did some more research on what was available.  I knew I wanted to go with Canon because that is what J’s sisters use and we could share lenses.  I was willing to go with an older model because I am new to the photography thing and am not planning on using the camera for anything more than personal purposes.  However, as I did more research that evening, I found the new Canon T series introduced High Def video to the cameras.  Adding the video camera feature was something I was very interested in.  I felt like we could really use this feature down the road when children are around.  That narrowed my choices to the T1i and the T2i.  Ideally I would have been happy with the T1i, but the T2i was on sale with a package deal for Black Friday.  The same store that had the T2i on sale, also had the PlayStation 3 with the new Move package available.  J had been waiting for a PS3 for a while now and this seemed as good as time as any to pick one up.

Still undecided, we had agreed to run to Toys R Us that evening to pick up some great deals for friends and family.  The #1 big item on our list was a $300 Little Tykes play house on sale 50%.  When we showed up at 9 pm (an hour before the store opened), there were over 400 people in line in front of us.   We were notified that the store was only going to allow 50 people in every 2 minutes (to allow them to disperse into the store) until they reached capacity of 400.  Of course, we were right over 400 so we had to wait a few extra minutes for a small group of people to exit the store before they would allow us in.  When we got inside it was a mad dash to find the play house tickets.  Luckily there were plenty left.  J got in line and I spent some time gathering the other items on our list.

We wrapped up at TRU by 11:30, went home to drop of our stuff, and then went out to meet up with some friends at a local bar.  It was great to go out and see some friends on Thanksgiving and it kept us awake before we had to be back in line for the store opening at 4 am!  We wanted to make sure we got these big ticket items so as soon as the bar closed, we went back and got in line (roughly 2:30 am).  This time we had our chairs and snacks and drinks to keep us awake!

By 4:30 am we had the camera bundle and the PS3 system in hand and were headed home for bed!  It was quite a Thanksgiving Day for us!  Here is what our couch looked like the next morning!

I am also happy because we had plenty of time later in the weekend to put up Christmas lights! 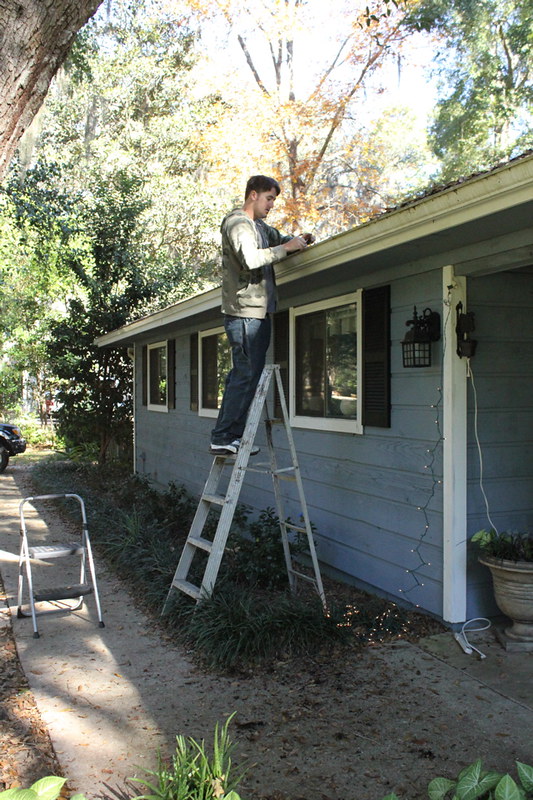 Other Posts from Us